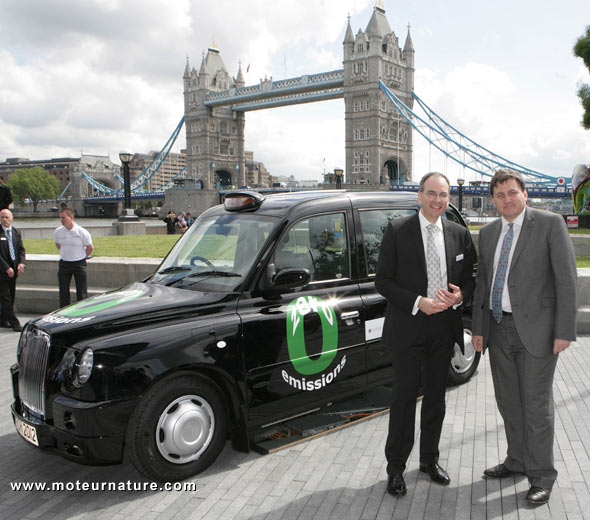 This is quite a paradox. Fuel cells are among the most modern technologies, and you would expect fo find them in some zoomy supercar, but the British chose to use them in one of the oldest looking car on the road, their iconic taxi. Even if you’ve never been in London, you’ve seen it on TV, as the car has been around since 1959 without any major facelift. Fortunately, there’s been much more change under the hood, with a modern diesel now standard, but it’s hard to think of diesel as leading edge for inner-city driving. We are expecting an electric drivetrain, and the team certainly looked at a solution with batteries.

But there was no way to make it without a fuel cell, because it was required that the new drivetrain shall not make any intrusion into the internal or luggage space. Remember that batteries take up a lot of space, and that London is not in southern California. We shall understand here that a strong heater and defog system are needed, and that they may be in use all day. The heater alone would kill any battery. With a fuel cell, the range is more than 250-miles, much enough for a day of work. Another thing that matters is that refill time takes only 5-minutes. It’s easier than charging overnight! The fuel cell comes from british manufacturer Intelligent Energy, whereas the electric drivetrain comes from Lotus engineering. Lotus Engineering was also responsible for the packaging of the full propulsion system including the fuel cells and has designed control systems to optimize performance of both the fuel cells and electric drive systems.

The fuel cell black cab was unveiled at City Hall and is presently undergoing track and road-testing prior to wider deployment. With only water emissions from its tailpipe, it could play a vital role in cleaning up air quality for urban dwellers. As this hydrogen taxi would not require any change of habit for drivers, we can only hope to see more and more of them.