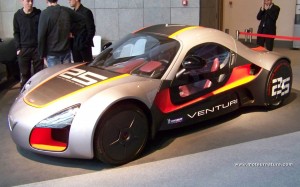 This is a car with which you don’t see yourself coming and going: there’s only one in the world. It’s a car that is totally unique, with unique looks, and unique technology. There will be a production version sometimes, that is definitely the goal, but more work is needed. We may call the car I rode in a prototype, but it’s also a show-car with outstanding fit and finish. The whole body is made of carbon fiber, some of it unpainted, and it was absolutely flawless everywhere.

The Venturi Volage was wearing a strange paint job, it was to mark the 25th anniversary of the brand, but the body itself was even more shocking with multiple holes that give you the uneasy feeling that there’s nothing between the wheels. To a certain extent, there isn’t. The Venturi Volage has 4 electric motors, inside its wheels. So if you look for an engine or a transmission, you won’t find anything like that. The Volage doesn’t even have a rear axle! And when you have the car in front of you, it’s quickly obvious that there’s something highly unusual about it. 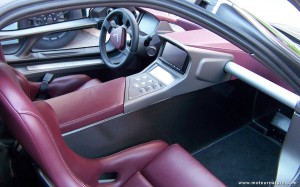 This unusual character is perceptible again inside. You get into it with Lamborghini-like scissor doors, and it’s immediately intimidating with carbon fiber everywhere. There’s a little carpet where you put your feet, and some leather on top of the dashboard, but it’s carbon fiber pretty much everywhere else, giving it a very… Serious look. I’ve been in quite a few racecars, cars that were all metal inside, but carbon fiber is different. It’s not cold to the touch like metal, and it has some kind of a low-glow dark shine, that doesn’t compare to anything. Some manufacturers have been using carbon fiber for little parts of trim on the dashboard, it’s another world when a complete car is made of it.

I’ve been riding in the car for about 15 minutes, city driving in Monaco, not as fast as I would have liked, but still very much entertaining. It’s so different from all the other cars. Engine noise? No noise. An electric motor makes some noise. In a Prius, or in a Tesla, you can hear it. A very little noise, but definitely a sound whereas I’ve haven’t heard anything in The Venturi Volage. I guess that’s the result of the motors being in the wheels. You hear them less than a motor in the middle of the body. And the motors are very small, this shall also make a difference. The Volage was also pretty confortable, not a small feat considering the suspension is… Inside the wheel. 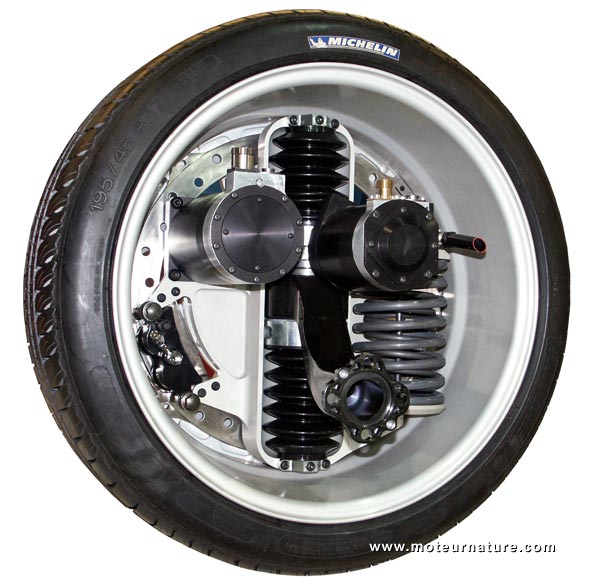 A picture is worth a thousand words, and you can see that there’s nothing else like this Venturi. This is the beginning of a whole new world in the history of the automobile. There’s only wheels. Wheels that could be mass-produced, with manufacturers designing whatever car they want around it. They just have to find a good place for the batteries. they are right in the middle in the Venturi Volage, in the center console. Makes a nice armrest, too. To sum it up, the car was very convincing, and I don’t have any doubt that this is the architecture of the future. But it’s also very clear that is still requires development. In new territories, since even a highly experienced suspension engineer would not know how to work in a car that doesn’t have a rear axle. Venturi is at the forefront of these new technologies, I hope they succeed in bringing them to market.

Actually, I’m pretty sure they will, but I know as well the cars will not be affordable before a long, long time.