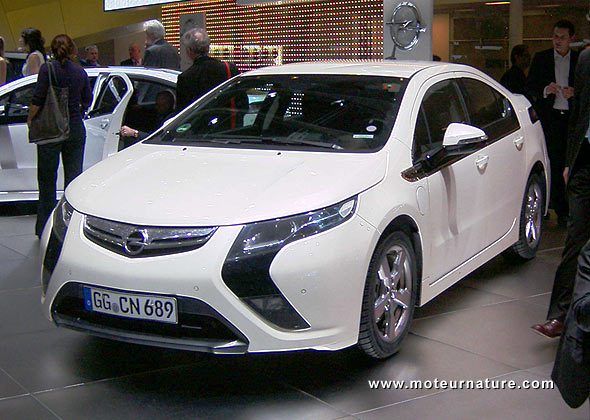 The Opel Ampera is the european version of the Chevrolet Volt, it will be available in Europe about 6 months after the Volt in the US. Both models were in Geneva, but with Opel the bigger brand on this side of the Atlantic, all eyes were on the Ampera. With questions. Cars are usually spotless at motorshows, but that was not the case of one of the 2 Ampera at Opel’s booth in Geneva. Another strange thing, the car had license plates. There was a reason for this, to show that this car can drive. That’s what it did to get there. Showcars travel in enclosed trailers but Opel employees drove this one from the factory in Germany, to Geneva.

The plug-in hybrid drives! To all people who wondered if it was for real, that drive proved it is. But there’s a question. We know that the Volt has a 40 miles range on its battery. We also know that Chevrolet famously advertise a 230 MPG rating last year. OK, but what’s the fuel consumption of the car in the real world?

There’s 370 miles between Opel’s place in Russelheim and Geneva, so I asked what was the car’s fuel economy during that trip, but I couldn’t get an answer. They didn’t want to tell me. OK, I’ll wait, and we’ll all wait. I suppose that Opel doesn’t want to give any data before the official european numbers are out… I wonder, don’t you?