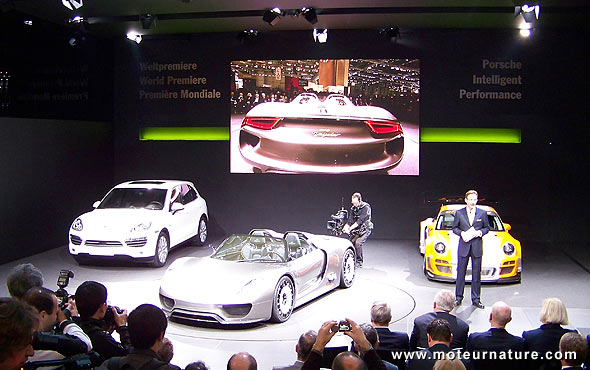 I was at the unveiling of the Porsche 918 Spyder at Geneva, and even after several days, I still can’t manage to find what was the most impressive thing about it. Its novelty? Its performance? Its name? Not everybody noticed this one, but the 917 was Porsche’s most outrageous racecar. It was 40 years ago, but the 917 was such a beast, with more than a thousand horsepower on its latest turbocharged version, it could still beat many of the best racecars of today (most of them in a straight line). With that in mind, you understand it means a lot that Porsche chose to call its new Spyder, 918. Right above that mythical model.

A green smart kid to suceed the heavy-weight monster of 40 years ago. That was hugely unexpected, and also simply unimaginable only a few years ago. The times have changed, and so did Porsche… The 918 Spyder boasts very impressive numbers. Numbers you don’t usually associate together. 718 hp. 198 mph top speed. 0 to 62 mph in under 3.2 seconds. And, most important, 78 MPG. With a 16-mile range on pure electric power from lithium-ion batteries. This calls for clarification. The engine is a 3.4-liter V8 making 500 hp at a red hot 9200-rpm. A pure race engine, coming from the Porsche RS Spyder, a car you cannot drive on the street, but that you may have seen last year at Le Mans. Porsche doesn’t says it, but everybody has to understand that you will not get anything close to 78 MPG if you enjoy revving that V8 at 9000-rpm. 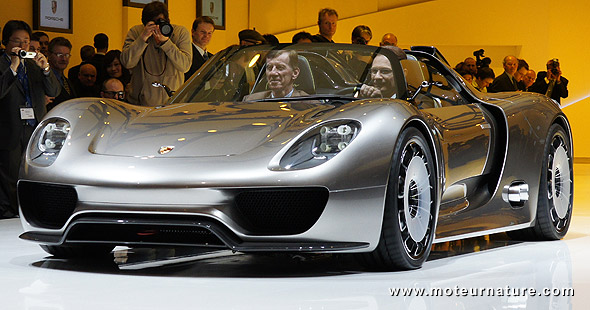 So it’s totally up to the driver. He can choose to drive in a gentle manner, and uses less gas as a Prius, or crack all speed limits, getting pretty much the same mileage as a Hummer. I now think that this is the greatest accomplishment of the Porsche 918 hybrid. It gives you a choice, whereas all past Porsches, even when driven conservatively, were always much more demanding than any economy car when it comes to fuel. There’s also the option of emission-free driving, but you don’t expect to drive a Porsche without the sound of an healthy engine behind you, do you? And with only a 16 miles range, you would not go far anyway.

The Porsche 918 Spyder is a concept, but with such a great looks, and the never seen before mix of economy and performance, there’s hardly any doubt it will go in production. We shall see it in three years time. But you’d better start saving money now, as the 918 makes another promise: to be very expensive. Think about the price of a Carrera GT. Or around half a million dollars…