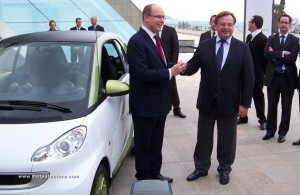 Many people talk about electric cars, but Monaco acts. The principality of Monaco has been promoting the use of electric mobility for more than 15 years, with incentives and free charging points in many parkings, and it has today the highest share of electric vehicles in the world. You may argue that the actual number of cars is small, very small, but Monaco is very small country. You can walk through the whole country, end to end, in less than one afternoon… A small country with small streets, and that makes it a very appropriate place for small cars. 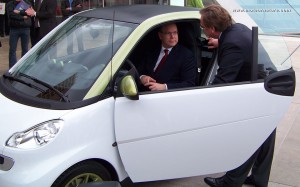 The Smart Fortwo is the essential small car. Launched by the Daimler group more than 10 years ago, it was conceived from the start to exist in an electric version. Unfortunately, it has been really long in the making, and we’re still waiting for the electric Smart to be available to the general public. You will not be able to buy the car before 2012. Only companies can lease one until them, companies, or governments, and in Monaco, that was the prince Albert II himself who leased a fleet of 10 cars. They will be used by the government, or companies doing public services in the tiny country.

They will contribute to make Monaco an even cleaner place to live, and a model for the other cities of the french Riviera.